Of the 38 sites assessed, more than 50% demonstrated a minimum or low level of disinformation risk.

The Global Disinformation Index (GDI) has released a new report on disinformation risks within Indonesia’s media market. This research was led by GDI alongside the Asia Research Centre at Universitas Indonesia from March through June of 2022.

The need for a trustworthy, independent rating of disinformation risk is pressing. This risk-rating framework for Indonesia provides crucial information to policymakers, news websites and civil society, enabling key decision makers to stem the tide of money that incentivises and sustains disinformation. This report outlines the findings pertaining to the disinformation risks for 38 news websites in Bahasa Indonesia. The sample was defined based on the sites’ reach (using each site’s Alexa rankings, Facebook followers, and Twitter followers), relevance and the ability to gather complete data for the site. 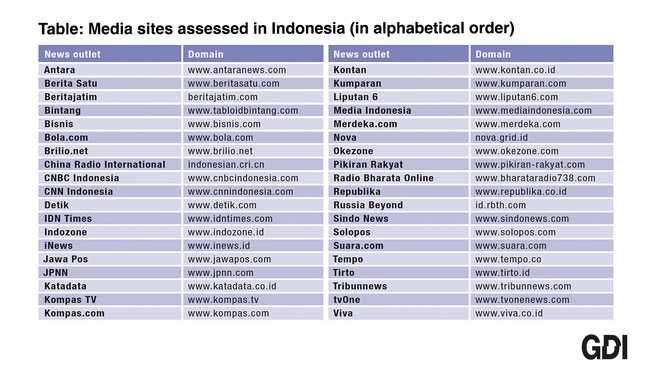 Within this distinctly new and reformed media landscape, Indonesia currently has an abundance of media companies supplying information for audiences across the archipelago. Other important characteristics of this move include a smaller number of nationwide outlets, and an increase in private ownership of media conglomerates.

Similar to many other global trends, advances in online media outlets have rapidly enabled information consumption as well as production and dissemination.In 2012, there was a marked spread of disinformation within the country according to experts. And starting in 2016, the Indonesian government implemented a number of initiatives to govern disinformation as well as to deter online media outlets responsible for producing provocative fake news.

The study found good average overall scores for the Indonesian media market (63 out of 100). 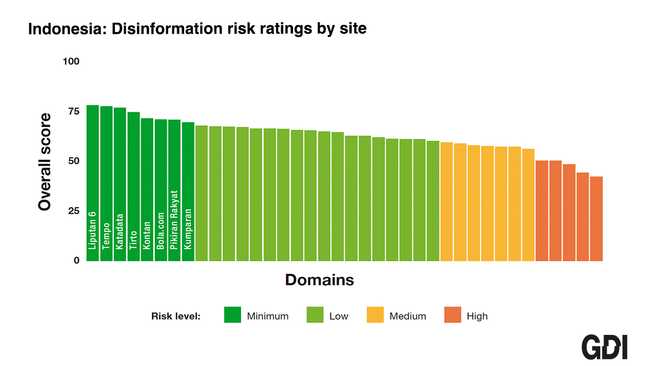 Eight sites were assessed with a minimum-risk rating. While these sites generally performed well on providing straight, reliable and unbiased content, a few provided insufficient information about attribution policies regarding elements like statistics, quotations, and external media, which have the potential of disinforming readers.

Eighteen sites were assessed with a low-risk rating. While these sites generally performed well on providing reliable and unbiased content, they often lacked key operational policies associated with strong universal journalistic standards, such as fact-checking and correction policies, attribution policies and practices to ensure accuracy. This indicated that online journalism remains new territory for pre-digital news outlets, which needs to be explored and adapted.

In this Global Disinformation Index study on Indonesia’s media market, 87% of the sampled domains were rated as presenting a minimum, low or medium risk of disinformation.

News sites could address shortcomings by taking actions such as:

Read the report for GDI’s full analysis — and to learn more about what newsrooms in Indonesia can do to diminish risks of disinforming their readers.

GDI analysed current ad tech policies and their enforcement in the present policy landscape. Read our recommendations on how to strengthen initiatives aimed at protecting our online spaces from harmful content.

The Online News Market in Australia

The Global Disinformation Index (GDI) and the Queensland University of Technology’s Digital Media Research Centre have produced an overview of disinformation risk ratings for 34 of the most visited media sites in Australia.

The Online News Market in Malaysia

The Global Disinformation Index (GDI) and The Centre for Independent Journalism, Malaysia have produced an overview of disinformation risk ratings for some of the most visited media sites in Malaysia in English, Malay and Mandarin.