Of the 69 studied news sites, 38% were assessed as having low- or minimum-risk of disinforming readers.

This study looks specifically at a sample of 69 English and Spanish news websites, although for this study, only content in English from these sites was reviewed. The sample of sites was defined based on reach, (using each site’s Alexa rankings, Facebook followers, and Twitter followers), relevance, and the ability to gather complete data for the site.

The study was designed to categorise each of the 69 sites as either minimum-, low-, medium-, high- or maximum-risk. These risk ratings were based on where the site’s overall index score fell within the distribution of all the scores in the dataset. That means the risk rating can be interpreted as the level of disinformation risk relative to the other domains included in the study.

GDI implements several safeguards to ensure that site reviews are fair and that scores are not based on whether the research team agrees or disagrees with content on the site. The index does not assess partisanship or the specific political, religious or ideological orientation of the site. A comprehensive explanation of GDI’s approach to ensuring neutrality can be found in the full report.

Most U.S. readers currently get their news from online sources, with 85% percent of Americans getting at least some news from a digital device, according to a study from Pew Research. Those younger than 50 years of age get their news almost exclusively from online sources. Social media plays a major role in this consumption, with 48% of Americans getting their news mostly from social media. Access to the internet is widespread in populated urban and suburban areas. But as of 2019, 27% of people in rural areas still lacked broadband internet access.

While Americans have embraced the digital consumption of news, the overall trust in media has continued to decline. According to a Gallup poll, America's trust in the media is lower than ever, with just 36% of Americans saying they had a great deal or fair amount of trust in the media as of 2021. This represents a trend that began in the late 90s and early ‘00s, when trust in mass media first began to decline.

While disinformation remains an issue in the U.S., legislators are still working on how to address the problem. Several bills have been proposed in Congress; however, the highly politicised nature of the issue has prevented progress.

The United States Media Market Review included sites that fell across all five risk categories, with overall scores ranging between 33.9 and 92.9 (Figure 1). Despite the 59-point gap between the best and worst performers, a plurality of domains were assessed as low-risk (22). 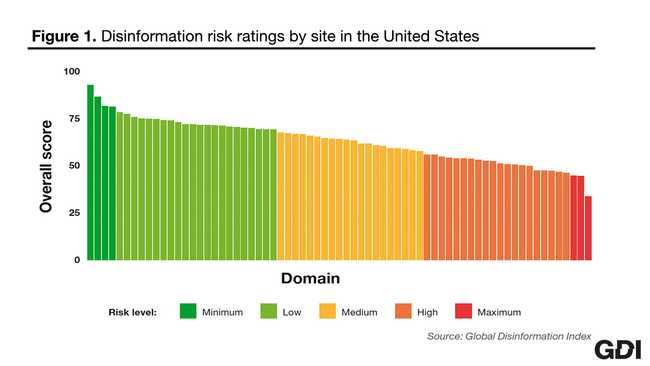 There were four minimum-risk sites, namely NPR, AP News, The New York Times and ProPublica. These sites each achieved very high scores on the Content pillar — three of the four scored above 90. Minimum-risk sites avoided content that relied on negative targeting and narratives of out-group inferiority, and consistently published byline information with their content, receiving scores of 90 or above on each of these indicators.

Despite the 59-point gap between the best and worst performers, 22 sites were assessed as low-risk. Low-risk sites performed on-par with minimum-risk sites in the Content pillar, with an average pillar score of 87.6. Similar to the minimum-risk sites, content on the low-risk sites largely avoided negative targeting and narratives that establish group-based inferiority. But lack of transparent policies for attribution, pre-publication fact-checking and post-publication corrections — indicators in the Operations pillar — were a consistent risk factor.

Twenty sites fell into the medium-risk category, another twenty sites were high-risk, and the remaining three sites were found to be maximum-risk. Weaknesses in the Operations pillar were the predominant risk factor for sites in the high-risk group. Among high-risk sites, average indicator scores for the Operations pillar ranged between 5.8 and 52.1. More than 75% of high-risk sites did not publish any sources and byline policies.

In this Global Disinformation Index study on the U.S. media market, the data from the study corroborate today’s general impression that hyperbolic, emotional, and alarmist language is a feature of the U.S. news media landscape. Every site displayed some degree of cherry-picking facts, omitting relevant information, making unsubstantiated claims, and/or using logical fallacies. Moreover, every site in the study used, to some degree, what GDI terms “targeting language,” which demeans or belittles people or organisations rather than simply presenting the news. Importantly, this type of language is distinct from criticism or satire; it is sarcastic, derogatory or hateful language that promotes division and distrust. Furthermore, many of the sites that relied on this type of content specifically covered politics. The data showed that this divisive language appeared on both sides of the aisle with similar prevalence.

Read the report for GDI’s full analysis — and to learn more about what newsrooms in the United States can do to diminish risks of disinforming their readers.

GDI's briefing on elections integrity adversarial narratives within ad-funded disinformation in the lead up to the 2022 midterm elections.

GDI analysed current ad tech policies and their enforcement in the present policy landscape. Read our recommendations on how to strengthen initiatives aimed at protecting our online spaces from harmful content.

Today’s online threat landscape is more complex and blended, with disinformation agents drawing on a large library of content to craft narratives aimed at social, political and economic conflict. It is time for a new disinformation model.